China is, and always has been, a patrilineal and patriarchal society. It is well known that Chinese society emphasis the importance of the family and the hierarchy within the family. Men's superiority and women's inferiority are deeply rooted in the 2,000-year-old Chinese culture and are reflected in many aspects of social life. Women generally have had fewer legal rights and career opportunities than men. Looking at the world today, many accomplishments in women's rights have occurred since the last century. In the 20th century, women in most nations have won the right to vote and have increased their educational and job opportunities.

Traditional Role of Women in China

Early in history, men dominated the Chinese society while women were deprived of all rights and were present mainly to serve men, they had to subordinate to their fathers, husbands, brothers and sons. Arranged marriages left women with virtually no voice in the society. Chinese women did not have rights and privileges. Women in Chinese society occupied a low and degraded status. They were customarily assigned the most despised and least important jobs and positions. The male child was looked upon as a "gift" from the gods, and treated accordingly. As for the female child, she had to endure multiple hardships, like the binding of her feet in order to cripple her from running and other customs.

Traditional Chinese society has been male-centered. Sons were preferred to daughters, and women were expected to be subordinate to fathers, husbands, and sons. Sketchy but consistent demographic evidence tends to show that female infants and children had higher death rates and less chance of surviving to adulthood than males. In extreme cases, female infants were the victims of infanticide, and daughters were sold, as chattels, to brothels or to wealthy families. Bound feet, which were customary even for peasant women, symbolized the painful constraints of the female role.
Throughout the thousands of years of Chinese history, it was common for rich Chinese men to have a wife and various concubines. Women were treated like slaves and prostitutes before the 1900s. Before the establishment of the People's Republic of China, when Mao Tse-Tung and the communist party took power in 1949, it was lawful to have a wife and multiple concubines within Chinese marriage. He pushed for gender equality and created policies to eliminate the oppression of women and he also outlawed many  of the old Chinese laws and traditions that they viewed as not benefiting the state.
Traditional society
China's post-1949 leaders devoted energy and attention to changing some aspects of traditional society, such as rural land property and the content of education, while leaving other aspects, such as family structure, largely untouched. Husbands were now not allowed to abusing their wives, have concubines, or use prostitutes. Marriages could no longer be arranged, wives with unbound feet were encouraged, and divorce was made easier to obtain. Both sexes were forced to wear the same gender neutral padded clothing. These changes initially gave females an increasing sense of self-confidence as they were encouraged to join the work force, become a communist official, and pursue educational opportunities.

In ancient China women were mere daughters, sisters, wives, mothers, mothers-in-law and daughters-in-law and they had to be obedient in three situations and posses four virtues. The three aspects of obedience were:  to obey their father before marriage, their husband during married life, and their sons in widowhood. The four virtues were: integrity, pleasant appearance, propriety in speech and be a skilled needlewoman. in the Chinese patriarchal society women had no right to voice their own opinion but submissively accept men’s decisions.


Status
In the past, Chinese women in China had a very low social status. Many cruel things were done to women in ancient china that are considered unfathomable in other countries. Women were only considered property and had to obey their brothers and fathers no matter what.   Fathers also despised their daughters to the point where instead of being named they were considered daughter number one and daughter number two, etc.   Once the woman was married instead of being property to her brother and father, she was now property to her husband and mother in law.

Ever since ancient times, there has been a saying that the three most delightful moments in one's life come with success in the imperial examination, marriage and the birth of a son. Parents in China would customarily arrange marriages for their daughters. In feudal society, a marriage would be decided not by a young couple's love, but by their parents' desires. Only after a matchmaker's introduction and when parents considered the two family conditions were similar and could be matched, would the marriage procedures go forward. Conditions that should be taken into consideration included wealth and social status. If a boy's family was well-off or an official family, his parents would never permit him to marry a girl from a poor family. After the wedding, a Chinese woman in China would move into the household of her husband's family.  Before 1949, 95 percent of marriages in China were arranged .According to 1995 statistics, independent marriage of women under 40 years old had reached 80 percent. In families, women enjoy the equal right of economic allocation, the decisive right of household administration, equal guardianship of children, and reproduction right.

The ancient Chinese did not think it was important to educate women. Women also did not practise ancestor worship as once they married their loyalties would lie with the families of their husbands. Ancestor worship was important to men as they remained loyal to one family. Women were not allowed to take exams and therefore could not enter into government service. Most girls did not go to school. Some girls who had scholars as fathers could learn from them, but female scholars were very rare.
In 1949 illiteracy among women in China was 90 percent, but by 1995 this had dropped to 24.05 percent. Now, there are women scientific and technological personnel numbering 10.2 million, accounting for 37.7 percent of the total; women graduate students number 53,517, and women undergraduate students number 1.18 million, accounting for 30.35 percent and 36.42 percent, respectively, of the total number of students at schools and colleges; the rate of enrolment of school-age girls has reached 98.63 percent; and women make up 45.63 percent of the members of various adult education courses.
Women’s work
Women's work was centred on the home. Tasks such as preparing food, cleaning and looking after children were the norm for the majority of women in ancient China. They were expected to have many children and most women felt the pressure to bear a son. It was common for women to take up manual labour in the home. Spinning, weaving and sewing were common occupations. Some peasant women worked in the fields with their husbands.
Changes

While there is still some persistent discrimination, from the 20th century until present, Chinese women have been treated more equally and fairly. Modern Chinese people regard their women with respect. Chinese women are now entitled to occupational and educational opportunities. The founding of the New China has liberated women from the unprivileged level to the master of their country, of the society, and of themselves. The 30 years' implementation of the Reform and Opening up policy has remarkably pushed forward the process of gender equality. Women's status has been improved and they have been able to better reach their full potential.

In the past half-century, the cause of women's human rights in China has been developing gradually and has achieved remarkable results. Health, education, employment and extent of political participation are widely recognized as the four main indicators of women's development in China. Gender equality has increased tremendously. Today, Chinese women in China are not considered subordinate to men. They can choose their own husbands, get a divorce and attend college. In the past 50 years, the Chinese government has taken every legal, executive and educational measure to eliminate prejudices against women, and promoted the development and improvement of women's rights. In 1995, the government stated that the realization of the equality of men and women is a basic national policy to promote social development in China.
Political rights
In the field of political rights, the Law of the People's Republic of China Concerning the Protection of the Rights and Interests of Women for the first time legislated on the proportion of women to participate in government and political affairs, "Women enjoy equal rights of electing and being elected with men. There should be a certain number of women representatives in national and local people's congresses, and the proportion of women representatives should be increased gradually." This regulation provides a legal guarantee for women's political rights.

Of course, it is a long and tedious task to realize the complete equality of the sexes in this country, because China is a country with a long history of feudal backwardness and the people are influenced by many old-fashioned concepts. At present, some unhealthy tendencies of prejudice against women, violation of women's rights and interests-including abducting, selling and kidnapping women prostitution and the patronage of prostitutes, and the violation of the rights and interests of women workers-still exist. But the Chinese government is adopting various measures and Chinese women are making positive efforts to eliminate these phenomena in an attempt to promote the development of women's human rights from legal equality to overall equality in fact.
Publicado por Chinese women´s life en 16:53 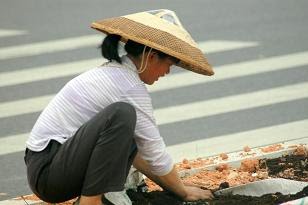